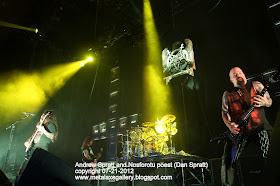 
This was the third year my family took vacation and went to the Mayhem Festival.  Most families usually go to fun parks in the summer but not mine.  The Rock star Energy Drink Mayhem Festival is a sonic thrill ride that is 10 times more enjoyable.

This is the third year my family and I invested in the Mayhem Festival.  Setting aside money and planning vacation time if needed to be ready for the Festival.  My son and I work as a team reporting the show.


The only draw back out of the whole thing was that when we got our passes we couldn’t go through the gate like the other reporters.  We wait with the rest of the metal brothers and sisters.  The long line wait was well worth it seeing such a great show.

Besides waiting in the long line the upside to it is that we talked with others waiting.  We’d listen to their stories about the other concerts that they’ve seen.  And some had the chance to meet someone from a band and tell us about the whole deal while we waited.

As we walk into the venue they offer food booths, merchandise, and restrooms easy to get to.  These were well spaced so it didn’t get too congested with the crowd.  My son and I always choose to cover Mayhem Fest because we enjoy working as a team.

First thing you must think is, “yeah you get paid to report the show.”  Our only payment is being at the stage take pictures and reporting the show.  For the love and support of the arts and enjoy the total package of the show they put on.

Throughout the day what really stood out that was amazing.  In between shows you could watch people doing stunts on dirt bikes.  Free style tricks with music playing kept the crowd occupied while each band was set up.

An act of kindness:
The most important thing about the concert was the brotherhood of metal brothers and sisters.  The crowd helped a wheelchair bound person crowd surf.  The wheel chair came down then the crowd and security helped ease them into their wheel chair. 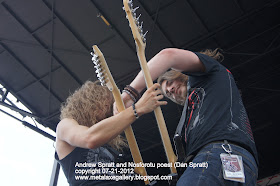 BETRAYING THE MARTYRS:
I always try to think about the first band we see that starts the show.  We missed the Jager band because we waited in line.  But Betraying the Martyrs was worth that wait.

The warm up band needs to take the crowd by storm like lighting a match that starts a fire.  You have to ignite them sonically and capture and keep them going until the next band.  The crowd responded great with every song they blasted out to the crowd.


I liked watching the guitarist show off and play the others guitar while facing each other.
This band sounded great live and we would go to see them again. 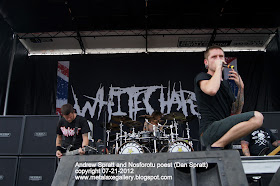 WHITE CHAPEL:
The crowd responded right away as the band walks out on stage.    I have to be honest with you some of the bands I knew nothing about and this was one of them.   My son let me know ahead of time that White Chapel was one of the bands we had to see.

I’m glad I listened to my metal son on this one.  We both figured the crowd can’t be wrong.  They really like them and so did we.  The true test of a band is how they sound live.

They brought the metal and they a worth seeing again. 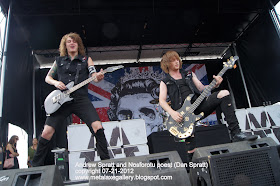 ASKING ALEXANDRIA:
My son and I watched the band walk past us to go back stage.  They carried themselves like rock stars but we’d be the judge of weather they could bring the metal.  The live test we think is a true test of a band.  You can’t hide your sound live.

Asking Alexandria brought the rock and we would see this band again. 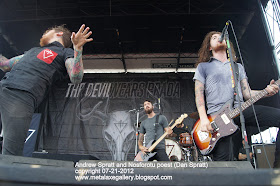 The Devil Wears Prada we’ve listened to on WGRD radio.  I really like their sound.  My son liked the sound of them when we cruise to town or on the way to a concert.  They sound great live and are worth seeing again. 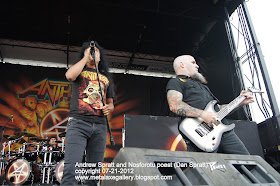 ANTHRAX:
I’ve listened to Anthrax off and on throughout the years and was looking forward to seeing them live.  I wanted to listen to Scott Ian live.  We both like the sound of his guitar playing.

I look forward to seeing them play again they brought the rock.  They kept the crowd going and got them ready for the main stage. 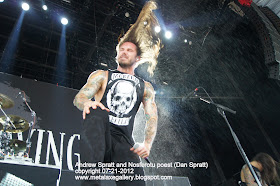 AS I LAY DYING:
As I Lay Dying got the crowd warmed up at the main stage.  We’ve never heard this group play live.  They sounded great and put on a good metal show.  We enjoyed watching their show.

Most of these bands I’d like to cruise to their music.  Get their cd and turn it up as I drive.   We would watch this group again also. 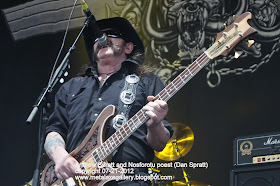 MOTORHEAD:
Motorhead with Lemmy is one of the metal godfathers.  If you don’t know who Lemmy is then you’re not metal.  I feel that he helped create metal music.

To see Motorhead was like a dream come true.  One of the godfathers of metal.  We would love to see Motorhead’s show again and again. 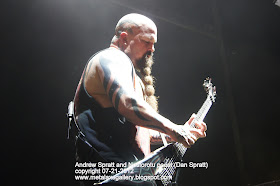 SLAYER:
This band I’ve heard playing my car and on my mp3 when my son get’s ahold of them.  The car stereo is turned up loud and Slayer’s playing.  Kerry King with his insanely fast washboard riffs.

I would never get tired of hearing Kerry King play guitar.  While I’m driving to the gym with my son I just get worried about getting a noise ticket.   Because you always want to turn up the volume when Slayer’s being played.

As they make it to the stage I remember their pyrotechnics were awesome to see and feel.  Slayer is a professional metal band that puts on an insane show. We would be glad to see them again.

While we were at Mayhem Fest my son had to buy a Slayer shirt to take home.  I could have bought a shirt too but I was content with being there and watching all the bands play great metal music.
If you don’t believe anything I wrote here judge for yourself and go to the next Mayhem Fest and see for yourself.  I go every year with my family that should tell you something.  I don’t let go of money easy unless it’s worth while. 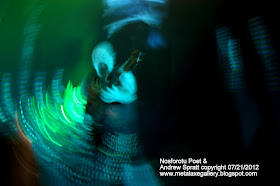