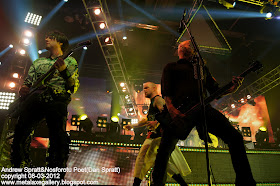 The good thing about arriving at the Kellogg Arena I parked right next to the arena.  They offer a parking garage attached to the Arena along with an indoor lobby area.  It was in the low 90’s that day so it was nice for the first time to wait inside where it was air conditioned.

I found out early that my cell phone only worked outside the lobby once inside I had no reception, which ruined our hopes for most interviews.  We did anchor one interview with John Outcalt the bass player for God Forbid.
The interview went great and we made John laugh at some of the questions we asked.

After the interview we made our way back to will call to get our VIP, photo passes and tickets.  Again it was air conditioned and in the winter it’s heated which is a plus for going to see a show.  You also have a Starbuck’s shop inside for eats and drinks which we stopped at.


I always say this and I always will, “The hardest job for a band is the first band in the show.  You have to start the crowd up like a car with a dead battery.  You have to charge them up get them started and keep the crowd going.” 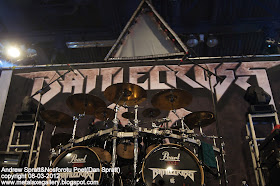 Battlecross:  This was the first band to start up the show and keep the crowd going.  The opening song did just that, “Push pull destroy”.  This song got the crowd going insane.

Another song that kept the crowd revved up was the song, “Fucking Hostile”.
The people went crazy and hostile just like the title.  Kyle Gunther belted out the metal vocals for the band that got the crowd going crazy. 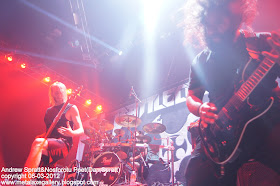 Other songs that I like that this band did are on youtube.com are “Misery” “Pursuit of Honour”, were two of my favourites as well as my son’s.  A few others that I like are, “Man of Stone”, and “Breaking You”.  This group carries the metal torch and does a great job as first band up in front of the crowd.

Don’t take my word for it go see or take a listen to them for yourself you won’t be disappointed.  My son and I would be happy to see this band in concert again and again that’s how good they are. 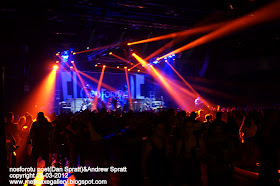 God Forbid:  We were lucky enough to bump into John Outcalt the bass player for the band.  So we asked for an interview because contacting anyone was out because of my disappointing cell phone.

DS & AS:  What music do you like to listen to?
JO:  “I listen to all types of music but lately I like listening to country standards Waylon Jennings, George Jones, Johnny Cash, Johnny Paycheck, Hank Williams, I like exploring this music.  I listen to everything but opera.”

DS & AS:  Do the arts flow through family member too?
JO: “My cousin plays drums.”

DS & AS:  Who inspired you to do music?
JO: “I started playing trumpet in 4th grade and that got me into doing music.  As far as playing bass that would be Metallica.  In the 8th grade I heard master of puppets.”

DS & AS:  You being famous do you still go out shopping or go on vacation without people bothering you?  This is the one he got a laugh with because being a bass player it doesn’t seem like you’re noticed by many metal heads.
JO:  “No I’m not the most recognized member in the band,” he laughed.

DS & AS:  Most of the artists we interview have done so much travel and adventure is there anything you’ve never done that you want to do?
JO:  “Skydive and I’d like to race motorcycles on a track.”  We mentioned to John that 5 miles down the road there is a road coarse track call Gingerman Raceway.  You can hear the motorcycles and cars racing from where we live.

DS & AS:  When you started out are there any family or friends or others that encouraged you to keep pushing on?
JO:  “My direct family always help out.”

DS & AS:  What would you tell my son about starting and metal band in an area where metal is a minority?
JO:  “Plan to be a weekend warrior and travel where it is popular.  Stay dedicated always practice, be professional on your intro’s, and during sound check don’t make a bunch of noise.  Be on time when they tell you too.”

DS & AS:  In writing music what do you usually do first write the words then add music or do you write music and then words?
JO:  “Music first then the words, generally we’ll have the structure down then the words some people do it the other way.”

At the end of the interview we both got pictures with John and thanked him for a great interview. 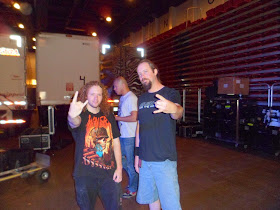 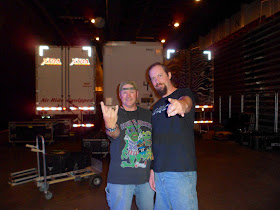 God Forbid carried the metal torch very well also.  The band is very professional.  Their sound is unique and well balanced metal. Their sound   will keep you wanting to see them in concert again. 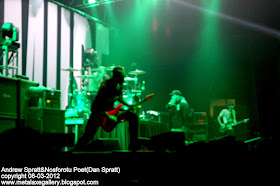 Emmure:  We enjoyed the metal they put out getting the crowd going crazy.  My son thought their sound was like Limp Bizkit with the vocals reminded me of that also.  Metal growls then to a voice spitting out metal lyrics it reminded me a lot like the Limp Bizkit.

But Emmure sounded better with more of a metal taste to their songs.  Some of the song that I listened to on youtube.com some of the songs I liked listening to I decided to list.  “Protoman”, I loved the growls in this song.

“Drug Dealer Friend,” this is a very graphic and visual song that will shock you.  “Solar Flare Homicide,” this also is a very visual song that we liked.  Others that I liked are, “Children of Cybertron,” “False Love In Real Life,” and “10 Signs You Should Leave”.

Most of the songs are very graphic and visual but sounded great for what it was.  We like them more than Limp Bizkit. 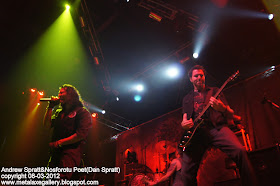 Popevil:  When the band came on stage they got the crowd going.  As we I was taking pictures I thought of some of the songs that I liked.  One of the first three songs they played was the, “Boss’s Daughter”.  The other songs that I like from Popevil I decided to list.

I remember this song the most is, “In The Big House.”  Me being a Michigan football fan I really remember them playing this song.  Over all Popevil we would love to see over and over again. 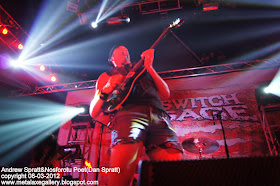 Killswitch Engage:  My favorite cover song they play is, “Holy Diver” I watched on youtube.com and really like their remake of it.  Other songs we both like are, “Break The Silence,” “Rose Of Sharyn,” “The End Of Heartache,” “My Best Serenade,” my other favorite is, “No End In Site.”

Their show was very intense metal and really like their sound and would hope to see their show again.   I’d have to say this band is one you never get tired of seeing.  Just like Five Finger Death Punch you see them one time.   And then you want to see them again, and again. 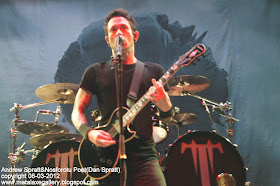 Trivium:  We really enjoyed Trivium and only heard their songs on youtube.com.  “Black,” I really like this song my son does also but the most favorite is, “Built To Fall.”  “Down From The Sky,” is a very good song.

“The Rising,” “Becoming The Dragon,” “Dusk Dismantled,” and “Inception Of The End.”  These are all great metal songs that my son and I both like.  It’s better you take a listen for yourself or see them live.  A true test of any band is how they perform live. 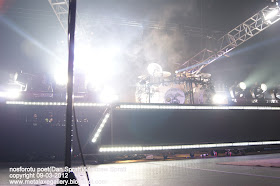 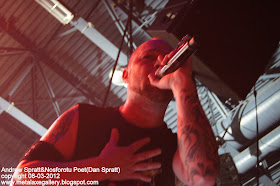 We made friends with some of the band members on facebook.com but it was better meeting them in person.  I mention to Ivan that I nicknamed him the “Metal Lion”.  Ivan said, “That would make a great tattoo I might get that.” 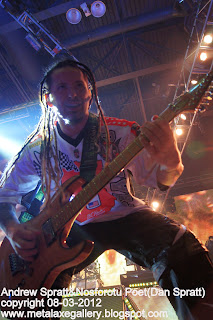 The reason why I call him the metal lion is when you hear his metal roar you respect.  And for the people he holds dear he has the heart of a lion.  It was great talking to Zoltan and mentioned that Brazilian Jujitsu deserves to be in the Olympics. 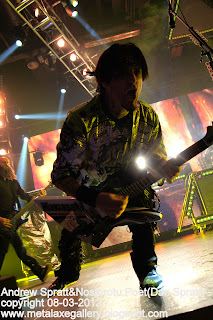 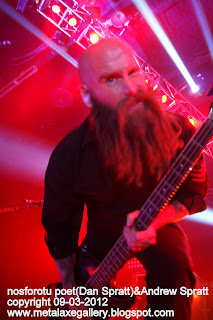 Jason, Jeremy and Chris were great to see in person and are friends with them on facebook.com.

The headline act comes out on stage and the crowd goes wild again.  “War Is The Answer,” was one of the songs played at the concert that sounded great live.  Again I usually watch some of the videos on youtube.com or if they’re shared on facebook.com.

Other songs that we love from this group are, “Remember Everything,” “Bad Company,” cover song.  “Far From Home,” and “Under And Over It,” are other favorites of mine.

At the concert Ivan mentioned the hard earned money everyone spent to see the show.  The first thing I thought is, “You don’t know the half of it of what my son and I went through.”  I am usually real tight with the money but I wanted to give a present to my son.

The present was for him not giving up on his hopes and dreams and never give up.  So I purchased Five Finger Death Punch platinum vip passes to go with our tickets and photo passes.  I am a factory worker full time and report the concerts as a hobby so far in hopes of some day my son having a career reporting for a media source.

But so far I fund it myself in support of the arts and our favorite bands.  So when I spend $300 - $500 it better be worth it.  And this show and every band in it were well worth every penny I spent.

The true test of bands is hearing them live and comparing them to recordings.  Don’t take my words for it again see for yourself and you be the judge. 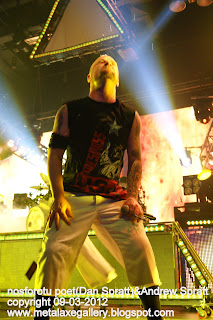 By Nosforotu Poet ( Dan Spratt) and Andrew Spratt  08-05-2012.
Special thanks to the bands for putting on such a great show.  And that I’m truly sorry to any of them I couldn’t connect with to interview.