More than March madness, Spring training or early crocuses, to many New Yorkers the sure harbinger of spring is the Allman Brother’s multi-night run at the Beacon. Opening the show with a recording of  Bill Grahm’s introduction to the classic Filmore East concert of June 27th, 1971, the band covered songs both on the original record plus Midnight Rider, Statesboro Blues and Whipping Post from the 2006 live bonus release from that historic show.   In between the opening Trouble No More and rousing Whipping Post encore, the Allmans were joined for several songs by the Jukes horns, who played with the band through amazing covers of The Band’s It Makes No Difference, and, according to Haynes, Bill Grahm’s favorite tune, Van Morrison’s Into The Mystic.  A mid show accoustic set included a rare rendering of Duane Allman’s Little Martha. 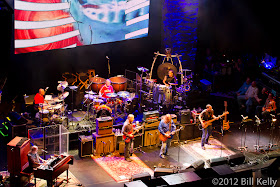