Slash with Myles Kennedy and the Conspirators

Slash with Myles Kennedy and the Conspirators

All of the Slash with Myles Kennedy and the Conspirators photos were taken at the Orbit Room, Grand Rapids, Michigan.  My son Andrew Spratt took all of the photos for this concert.

Festival Survival Guide Bonnaroo and Beyond

Gearing up for Bonnaroo and other other weekend long festivals takes some thought, planning, time and money.  Thinking ahead though will make your festival experience a lot more fun and in the long run save you time and money during the festival where time is precious.  Needs will vary depending on your needs and level of desired comfort but here are some suggestions and things to consider.  Enjoy our illustrated Bonnaroo and Summer Festival Survival Guide from Concert Photos Magazine!

Spiritualized Dazzles The Wiltern in Los Angeles, California on 5/22/12

Spiritualized is on tour to promote their new album, Sweet Heart Sweet Light, and made a stop at The Wiltern in Los Angeles, California on May 22, 2012. The British ensemble was in top form and dazzled the crowd of steady followers as the band launched into their brand of psychedelic space gospel rock. On assignment with a record label on this particular evening, I noticed that the followers of the band are people that really know music, and follow talented bands of every genre. Needless to say, Spiritualized is a musician's band with a healthy dash of soul. The setlist at the Wiltern consisted of several songs off their new album and classics such as "Come Together" and "Cop Shoot Cop." Jason Pierce, the bands front man who also plays in outfits such as Lupine Howl, guided the band through an epic night of music that was greeted with belting applause and intense awe. Spiritualized is currently on tour in the United States and then off to Great Britain.

Brief and Photos by Doug Siegel 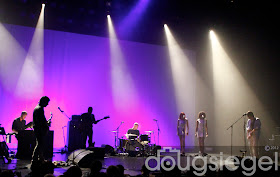 Flight to Mars, the Tribute and Benefit for CCFA featuring Mike McCready and Ace Frehley

Flight to Mars is a tribute band to the 80's rockers UFO, who play a few times a year while all the members of the band are not on tour with their regular bands. These members include Mike McCready (Pearl Jam), Gary Westlake, Paul Passereli, Kelly Van Camp, Ty Bailie and Tim DiJulio. The opening night of the Flight to Mars tour took place at The Casbah in San Diego. All proceeds of this performance went to The Wishlist Foundation to benefit the CCFA's Camp Oasis and Advocacy for Patients. The show was photographed impromptu in black and white due to band demand (to appear 80's garage band-esque), as I was there on an "off night" to see my old friend Mike and hear some music. The performance sold out while remaining intimate in atmosphere, especially considering some of these guys are on arena tours. Halfway through the show, there was another announcement. Mike McCready, the most well known member of  the band, announced that Ace Frehley of Kiss flew in to play the show with them and help out the cause. Mike then states, "This guy is the reason that I play guitar," which is a fairly strong statement from one of the gods of grunge who wrote "Alive" and "Even Flow." Flight to Mars played a three hour show and clearly had a great time. They are on a brief  tour throughout the west coast with their final show taking place at The Showbox in Seattle, where most of the band resides. Support local music with a great cause!

Brief and Photos by Doug Siegel 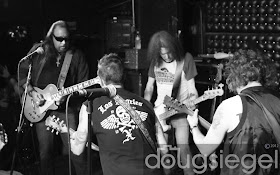 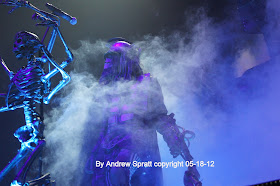 The show took place at the Deltaplex Arena, Grand Rapids, Michigan 05-18-12.  The venue had plenty of room to move around which we liked the most.  When you watch a show and you need to get a drink or take a break you want to be able to get out easy.

This venue wasn’t bad at all it had plenty of seats and honoured handicapped people I noticed in wheelchairs.  Security was top notch maintaining control of any emergencies that would arise. 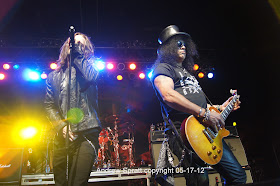 The hardest and most important part of putting on a good show as far as being on stage is starting the show. I look at it like jump-starting a car. The car being the crowd, and the jumper cables; the starting band.

The first band needs to have that energy that sonically grabs you by your ears and shakes you around and doesn’t let go.  Hillbilly Herald does that to the crowd and they did it to us. When you capture a crowd the way Hillbilly Herald does you can lose your worries and just get lost and listen to the pure, clean hard rock they put out; and we’re talking authentic hard rock.

Roger Waters, former bassist and vocalist of the legendary band, Pink Floyd, has brought his arena venue tour to San Diego. With a sold out crowd despite tickets ranging from $70 to $300, the fans are clearly awaiting this monster of a show as almost everyone is in their seats an hour before the show, including the likes of Bill Walton, Tony Hawk, Cory Feldman and San Diego Mayor Jerry Sanders. There is a similar feel to the rock scene in Cameron Crowe's "Almost Famous," which was filmed at this location in San Diego. The Beatles are playing on the house sound system and then all of a sudden it begins, two sets of "The Wall Live" in its entirety. Waters then appears in his aviator sunglasses, black trench coat with suitable logos of "The Wall" emblems and says "go to the show." Too late Roger, we are already here with matching grins ready to be blown away. If this show comes to an area near you, it is not to be missed! 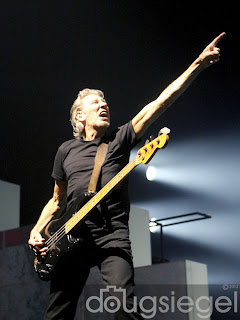 You could not asked for a more beautiful evening for The Woods at Fontanel’s season opening show. And what a show is was.
Michael Franti captured the crowd from the get go with his rocking, funky blend of musical style’s. When Franti came down in the audience it was not that he captured the crowd, more that he became one of us, all “Human” as his guitar strap proudly proclaims. Then Steve Winwood took us a musical trip through a decades long span of his work, started with “I’m a Man” and finally ending with “Dear Mr. Fantasy”,. singing us his tune. It was one of the best evenings of music I’ve ever experienced. Set in, as Franti’s guitar player told me, “what was one of the coolest, most beautiful venue’s ever. 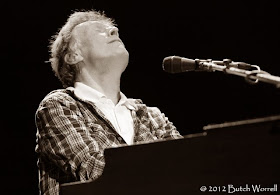 
B&H Photo Video and Pro Audio is the best camera store in the United States.  Not only does the independent camera store stock all of the best pro and consumer camera, video and audio gear, B&H has a huge inventory of computers & laptops, software, lighting, telescopes, hard drives and home entertainment electronics.