On Saturday June 9th, 2012 in “That Tent” at Bonnaroo Music Festival saw a performance by none other than 70’s and 80’s metal icon Alice Cooper. This show was yet another contribution to Bonnaroo’s recent theme of hosting nostalgic rock performances from the past thirty years. The crowd was a testament to this, consisting mostly of the older portion of the Bonnaroo attendees. Despite this being his sixth decade being a musical performer, Cooper and his band gave a high energy performance that was surprisingly entertaining. The foggy backdrop on the stage matched the costumes that Cooper and his cronies were wearing; they looked as if they came straight out of an 80’s hair-band music video from a cheesy horror movie.

To close out “This Tent” on Saturday, June 9th at the Bonnaroo Music Festival was an iconic performance from none other than GZA (Gary Grice) performing the album Liquid Swords with Groupo Fantasma playing his background beats live. GZA, who gained notoriety as a founding member the legendary Staten Island based hip hop ensemble Wu-Tang Clan, brought back the hype that has been surrounding the LP since its release in 1995.

Colin Hay Gets Back to Work


Colin Hay, the front man from the Australian 1980’s super-group, Men at Work, made a
performance at the 2012 Bonnaroo Music Festival in Manchester, Tennessee. He played three shows
during this monster of a festival, hosting upwards of 80,000 festival goers over the course of four days.
His short 30 minute set on the Solar Stage on Friday, June 8th is seen below in the photos. It captured a
smaller crowd for those willing to brave the mid-afternoon sun. Everyone who thought they would get
their retro music fix from a full blown energetic Men at Work concert was dead wrong. 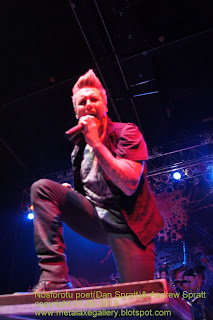 On our way we couldn’t believe that the weather was perfect no snow in sight.  Both my assistant son and I looked forward to seeing Papa Roach. We missed them at the Uproar Festival in Grand Rapids.

They cancelled that show and I wanted to hear Papa Roach live.  The true test of any band is how they sound live.  The other part of the test is how a band works the crowd.

After we arrived at The Orbit Room in Grand Rapids, Michigan we saw a long line.  The loyal fans of the bands made it to the show, no matter how cold it was.  The Orbit Room was packed with people for the first show and on. 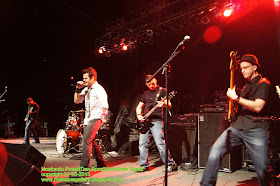