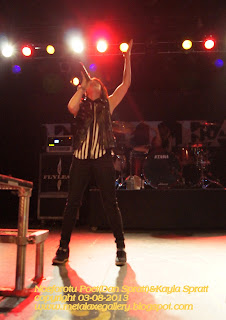 
The Intersection announced that Flyleaf, Drowning Pool and Stars In Stereo were allowing all ages entry for the show.  This attracted people young and old alike to show up for the concert.  With each minute that went by the line kept getting longer. The line stretched outside the Intersection and down the block.

Throughout the line you could hear people shouting, “Let The Bodies Hit The Floor.”  You could see many people in the crowd brought their families that enjoy rock and metal music.  Even before the first band would perform the stage area was getting packed with people gradually stretching back to the bar area.