The Shins - Indie Music at The Hangout Festival

Welcoming a nice change of pace from the jambands and DJs on Friday, May 17 at the Hangout Music Festival was indie band, The Shins.  They played into the sunset from 7:30 until 9:00 on the sunset stage to a more resolute and seemingly sober crowd.  It was fairly easy to tell who the true Shins fans were.  Originally from Albuquerque, New Mexico and now residing in Portland, Oregon, The Shins were right on point with their show.  Although their music is relatively unknown to those that are not into their scene, one could not help but appreciate the caliber of their lyrics and instrumentalism.  They played two of their biggest hits: “Caring is Creepy” and “New Slang,” which are songs that were popularized by the 2004 movie, Garden State.  They closed their show with their also reasonably popular song “One by One All Day.”

The Kings of Gulf Shores

The Kings of Leon were the Friday night headliners at The Hangout Music Festival 2013.  These guys know how to keep it in the family, consisting of the Followhill brothers Anthony on vocals and rhythm guitar, Ivan on drums, and Michael on bass.  Their cousin, Cameron Followhill plays lead guitar.  While the boys are originally from Oklahoma, the band is now based in Nashville, TN.  The Kings of Leon have captured their own unique sound which blends southern rock with pop and alternative and even a little blues.  They played into the night to an absolutely full beach with thousands upon thousands of screaming fans cheering them on.  The Kings of Leon played just about all of their big hits throughout their 3 hour set including “Revelry,” “Notion,” “On Call,” and “Sex on Fire.”  Throughout the show the vocals were echoed by the youthful audience, who recited the lyrics word by word with them.  It was plain as day to see that these guys have become rock stars in their own right.

Jim James, best known for being the front man of My Morning Jacket, played to a bright eyed crowd Friday afternoon at The Hangout Music Festival in Gulf Shores, Alabama.  The mid-afternoon sun beamed down on the festival goers as they bobbed and swayed to the charismatic man in the eggplant purple colored suit.  Jim James switched back and forth from his Flying V electric guitar and a saxophone throughout the show.  James’ set was mainly comprised of his solo material, but he did also dabble into a My Morning Jacket tune or two.  You didn’t have to be a My Morning Jacket fan to enjoy Jim James’ performance.

I'll Have a Beach Breeze with My Gov't Mule

Saturday at the 2013 Hangout Festival was full of classic rock and roll on the main Hangout Stage.  On this beautiful afternoon on the beach, Gov’t Mule’s hard guitar licks took over from 3:30-4:45.  The southern rock band is led by possibly one of the hardest working men in show business, Warren Haynes on lead guitar and vocals.  He is also known for his time playing with The Allman Brothers and The Dead.  Gov’t Mule also features Matt Abts on drums, Danny Louis on keys and rhythm guitar, and Jorgen Carlsson on bass.  This Hangout performance really showcased Haynes’ daunting guitar skill with his consistent wailing guitar solos and effects.  These veterans play so well together as a band that it makes any rock and roll lover an instant fan.  One highlight of the show was the song “Soulshine,” originally done by Larry McCray.

Lorin Ashton AKA Bassnectar played into the sunset on the other side of the beach from 7:30-8:45 right before Tom Petty closed out Saturday night at The Hangout Festival 2013.  It seemed slightly odd watching Bassnectar at a festival during the daylight, but this was unavoidable at a festival where the music has to end at 11:00 PM.  While the show was very high-energy and enjoyable, the first hour lacked the usual element of his profound visual spectacle because the sun subdued the normally epic light show.

X Factor winner Tate Stevens put on an awesome show in Springfield, Illinois at the Prairie Capital Convention Center. He played a few of his hits, some of the music that made him a winner on X Factor and also some great covers, ending his set with Separate Ways from Journey.

He was very humble and grateful that he won, and the crowd seemed to agree.

Here are some photos from the night, more at my site below.... 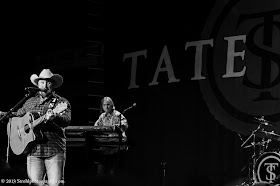