Midpoint Music Festival is the Midwest's version of the SXSW Music Fest held in Austin. The festival features several large acts and several small acts of different genres, all lumped into one great weekend of music. On the bill this year were national acts such as Black Rebel Motorcycle Club, The Head and the Heart, The Breeders, Cody Chesnutt, Shuggie Ottis, Daughter, Leogun, Larry and His Flask, The Thermals, Kurt Vile and many more. Some of my favorite local acts were The Harlequins, Wussy, Tweens, Cliftones, and OH Knife. There are more photos of Midpoint at http://www.flickr.com/photos/doug_siegel_photography/ and at the Citybeat website. 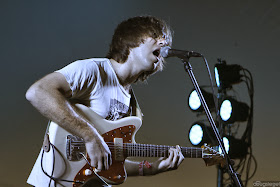