The 2014 Forecastle Festival in Louisville, Kentucky

Forecastle Festival had another successful year in Louisville, Kentucky. Forecastle is put on by AC Entertainment, the same group that puts on Bonnaroo, Outsidelands, Mountain Oasis and several other great festivals. A Forecastle is a superstructure at the bow of a ship where the crew is housed. This is where the workers unwind after a hard day of work in unruly waters. Everyone came together and had a great time on the banks of the Ohio River with a lineup including Jack White, Beck, Outkast, The Replacements, Sharon Jones and The Dap Kings, Gary Clark Jr., Band of Horses, Ray Lamontagne, Spoon, Nickel Creek, JJ Grey and Mofro, Reignwolf, The Black Lips, Lucius, Jason Isbell, Jenny Lewis, Brett Dennon, 21 Pilots, Against Me!, Spanish Gold and about 50 other acts. The Bourbon Tent, with over 20 of Kentucky's Finest Distilleries, was a huge hit as well. There were also great late night parties with Moontaxi, Jim James, and several other notable acts. Check out more of my coverage at Unsung Melody, The Blue Indian, and Nashville's Tennessean. Some bands are not included in this article due to artist release. Reignwolf coverage will be in RollingStone.com in Emerging Artists section next month. 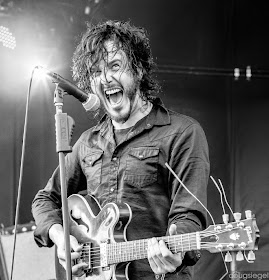