Chicago & Earth, Wind and Fire Take the Stage Together for an All-Star Performance

Chicago joined forces with their touring mates Earth, Wind and Fire last night at Riverbend Music Center. Needless to say, there were a lot of people on one stage but they sounded very tight, like they have been doing this together for years. Chicago is only second to The Beach Boys in Billboard singles and album chart success in the music industry, which gives the band some serious clout. Riverbend was packed with loyal fans of both bands. 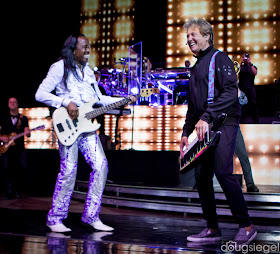