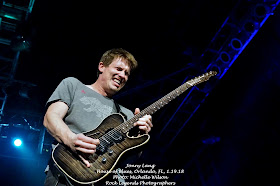 Once in a while there is a concert that pulls you in from the moment you arrive, wrapping you in an almost visceral cloak of unbridled joy. Jonny Lang's performance at House of Blues, Orlando, was just such a show. There was a special vibe coursing throughout the Central Florida venue, one that would endure for the entire evening. Perhaps it was due to the brilliant pre-show music playing from Doyle Bramhall II's latest release, Rich Man. Perhaps it was the visage of Lang himself, lost in the profound hypnosis of his own guitar reverie, as if he knew a secret that no one else knew. Perhaps it was the knowledge that night after night, year after year, the child guitar prodigy with the 40-year-old gritty vocals, Kid Jonny Lang, morphed into the international blues-drenched Christian rocker sensation of today. Perhaps it was all of these thoughts spinning in the minds of the packed crowd, but whatever it was, Lang was on fire and the audience knew it from the first note.