It's hard to believe that 25 years have elapsed since the release of the eponymously named, smash debut record from Seattle-based post-grunge rockers, Candlebox. The eleven-song chartbuster is as fresh today as it was in 1993. Founding member/lead singer Kevin Martin joked on stage at The Plaza Live that the milestone anniversary meant that some of us were as old as he was. While that may be true, the no-holds-barred frontman still has the chops and the audience appeal to perform as if it IS still 1993. Delivering a 90-minute blazing set for the packed, standing-room-only sea of fans, Martin and his band proved that not only do they still have it, they totally own it. Backing Martin on this tour are guitarists Brian Quinn and Island Styles, bassist Adam Kury and drummer Dave Krusen. 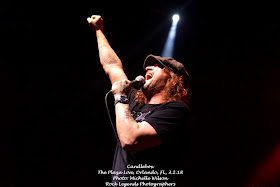