When Dead and Company announced their summer tour it was surprising there were no Canadian dates. Just kidding; it would be a surprise if there were. Dead and Company includes some of the Grateful Dead original members: Bob Weir, Bill Kreutzmann and Mickey Hart; joining them are John Mayer, Jeff Chimenti and Oteil Burbridge. 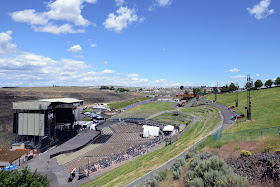 Being a Pacific Northwest resident (from Canada), it was an easy decision to attend the Gorge Amphitheater in George, Washington for the Friday June 7th and Saturday June 8th shows, even though the Pacific Northwest is known for cold rain and sometimes snow. We got lucky with warm days and cool nights.