A Bicoastal Double Shot of Keb' Mo' in Florida

Last month, multi-Grammy award winner Keb' Mo' kicked off a short, acoustic solo tour beginning in Florida. Rock Legends Photographers was there to capture the sights and sounds of nights two and three of this intimate, stripped-down soiree. Keb' Mo' rejoins Taj Mahal for the next leg of the TajMo tour, which resumes Monday, 7/23/18 with two sold-out shows in Denver, and then returns to solo dates in late August (for full tour schedule including solo and TajMo dates, see below). 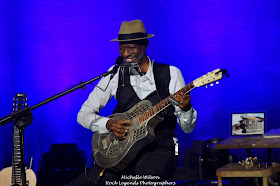 Performing a two-hour, sold-out show (9:10pm to 11:10pm) void of opener or intermission at Clearwater's fabulous Capitol Theatre, the fans got exactly what they came for - a stellar evening of music and comedy with one of today's most engaging raconteurs. Anyone who has attended a Keb' Mo' show knows that his concerts develop organically. Set lists are usually out the window as fans call out requests, which generally are granted. "I don't even know why I make a set list. It's never right. All ya' gotta do is hesitate one second and someone starts calling out songs. Happy now?" joked Mr. Mo'. After pausing from his lengthy tour with Taj Mahal, it was an adjustment to return to his vast solo catalog. With his unique brand of self-deprecating humor, Keb' poked fun at himself after flubbing some lyrics, but it only endeared him that much more to his fans.  "I know all the words to songs except the first line," he joked. No one cared, as everyone laughed and had a ball.

Switching among guitars including a Gibson Signature Bluesmaster acoustic and a Martin acoustic, a National ResoRocket resonator, a smaller  Republic travel resonator (his "pint-sized guitar"), a Gibson Midtown and a banjo, Keb' offered many favorites from his extensive career, with intermittent slide and harp accompaniment. In Stuart, a fan yelled out "Got any red guitars?" to which Keb' replied "Got some spray paint?"

Making this a true "family" tour, Keb's wife, Robbie Brooks Moore, and son, Carter, joined Mr. Moore on this outing, and the entire family went to visit Winter and Hope, a pair of rescued dolphins, at the Clearwater Marine Aquarium. They loved the visit and received this fabulous photo, which was prominently displayed on stage for the entire show. 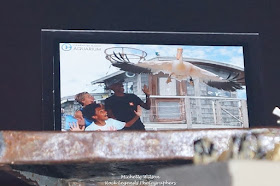 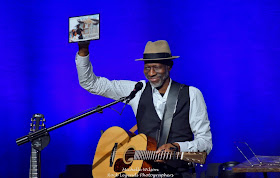 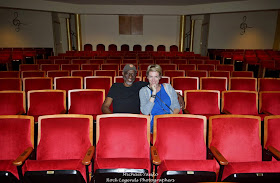 One of the funniest moments of the evening involved a rare fan request for "Victims of Comfort," a somber song in itself, but the ensuing back and forth was priceless. "You have to bring me a small gift to play that. This is a big risk here. I put my life on the line to do one dangerous song in the set. Where's the guy who wanted this song? Do I have my gift yet? (A pair of sunglasses was then handed up onto the stage.) I'm gonna find you after the show. I bet if you were on 'Let's Make A Deal' you would find a paper clip." And with that, Keb's guitar tech, "Ray-Ray," handed off the Martin acoustic, and the house got "Victims of Comfort." A few songs later, Keb' DID get his paper clip from that same fan, and he handed it to Ray-Ray, telling him to "put this with the rest of them." The entire exchange was a riot. In the two photos below, Keb' is checking out the sunglasses and then even HE is laughing at the paper clip between his fingers. (The sunglasses were returned to the fan, by the way!) 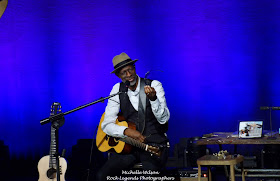 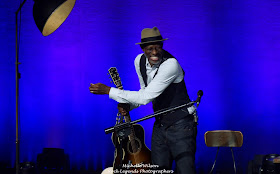 The two hours were over in the blink of an eye, and no doubt the Clearwater fans would have loved another two hours.

As Soon As I Get Paid
Closer
Rita
Life Is Beautiful
Just Like You
Loola Loo
Every Morning ("I hope we offend a lot of people. It's my aim in life to offend a lot of people in a loving, kind sort of way.")
France
The Worst Is Yet To Come ("I messed this up so bad last night. I was so embarrassed. I hope I can redeem myself.")
You Can Love Yourself
Suitcase
Shave Yo' Legs ("A picky man is a lonely man. I'm a grateful one.")
More Than One Way Home/Grandma's Hands/No Diggity (Bill Withers wrote Grandma's Hands, and Blackstreet's No Diggity uses a modified backing track from the same song-this was a very cool montage!)
Angelina (with a snip of Blackbird from The Beatles)
Victims of Comfort
The Itch
Dangerous Mood
Government Cheese (totally transformed on resonator slide into full-on Delta blues)
Henry
Encore: She Just Wants To Dance
Better Man (crowd sing-along) 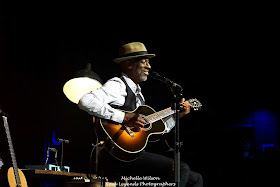 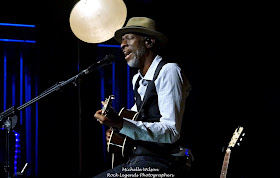 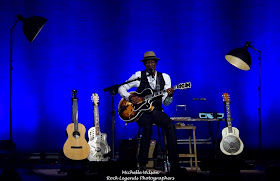 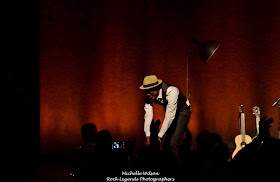 The first show at The Lyric Theatre, a wonderfully intimate venue in Stuart, got under way at 6:05pm. While the crowd was a quieter one than the later show at 8:30pm, they still got a full 75 minutes of vintage Keb'. He definitely was "on" for both sets and kept the audience laughing throughout the night. One of many zingers: "The City of Nashville Bank appreciates you paying my house note!" 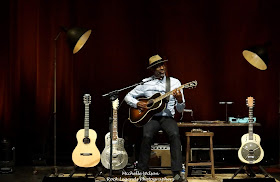 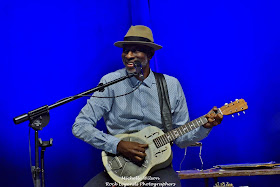 As he did in Clearwater, Keb' had a real-live, old-fashioned record player on stage. While Ray-Ray changed chords on one of the guitars, Keb' walked over and played a Willie Dixon record and danced, commenting the night before in Clearwater that "some people forgot how the blues is supposed to sound." In Stuart, he danced with a woman wearing a blue dress. 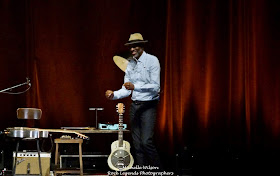 Clearly enjoying himself, he told the crowd "I gotta say I'm having a good time tonight." He shared a story about one of his recent guitar purchases. He and Robbie were on their way to their son's choir rehearsal, when he went into a guitar store "by mistake." He bought a "grown-ass man guitar" and had to trade nine guitars for it.With Robbie in the audience, Keb' lovingly looked up to where she was (which he did many times during the evening) and said, "My wife was so nice - she let me buy this - this is dedicated to her." And then he sang "Rita." It was a true highlight of the evening. 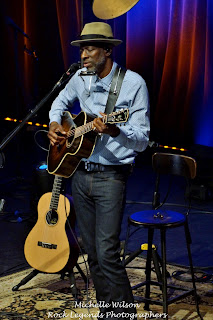 As Soon As I Get Paid
You Can Love Yourself ("It's a love song.")
Suitcase (Realizing he has the wrong harmonica: "That's so wrong. I have to do that whole intro all over again." Later on he confided, "I never really learned how to play the harmonica. I learned enough to keep time.")
Loola Loo (Just before he started, he had people from the back move up to empty seats in the front. "When the people who really have the seats come back they can come up here on stage," he joked.)
Just Like You
Government Cheese
Angelina
Henry
Shave Yo' Legs
Rita (with a snip of The 59th Street Bridge Song (Feelin' Groovy) written by Paul Simon and famously recorded by Simon & Garfunkel)
Life Is Beautiful
Old Me Better
More Than One Way Home
Encore: She Just Wants To Dance (crowd clap-along)
City Boy (a personal favorite) 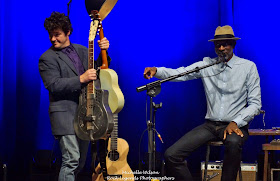 Show Number Two at The Lyric Theatre, a 90-minute offering that ran from 8:30pm until 10:10pm, involved a much rowdier and super-fun crowd (perhaps the alcohol played a small part), and Keb' was absolutely hilarious for the entire set. "I thought the second show was gonna be trouble!" Somewhere in the midst of the show, Keb' shared this nugget: "I'm totally winging it, you know, just like all of us in life. But nobody wants to admit it. Except Bill Gates. He's not winging it." 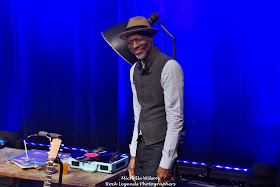 Jokingly, at one point, Keb' looked up to where his wife was seated and asked, "Hon', you got a beer up there?" Shortly after, a fan placed a beer on the stage. "I can't drink. I get silly. Very silly. I can't drink while on the job. It's not like I'm on the wagon or anything." He raised his cup and cheered the crowd, but certainly did not drink any! 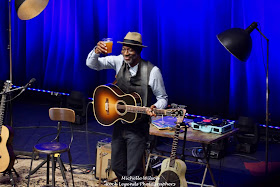 France
You Can Love Yourself
Suitcase
Loola Loo
Just Like You
Government Cheese
Don't You Know ("This is one of those songs that nobody ever asks for but I'm gonna play it anyway." Keb' broke out the banjo for this one.)
Henry ("Last show I did this song lower by mistake but I liked it so I'm gonna do it again. This second show is later so it will have more songs, but don't tell the people at the first show because they wouldn't have come.")
Angelina ("I forgot my harmonica.")
Rita ("This song is way too slow. So you know what we're gonna do? We're gonna make it slower. Slow is good. Slow is underrated. We like slow. Alright - put it back in family mode.")
Every Morning
Life Is Beautiful
The Door
Am I Wrong (A great clap along with the crowd ensued. "If you're a little shaky on your clapping, maybe lay off this time." The crowd was great, though, and he loved it. "If you guys were a rhythm section you'd get hired!")
Old Me Better ("This is a song my wife hates. She's here tonight. It's not about us. It's about other people.")
Encore: She Just Wants to Dance
Shave Yo' Legs (One of many crowd requests) - "Good one! Can we end with that one?" 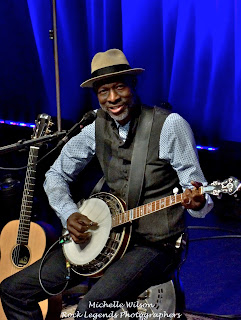 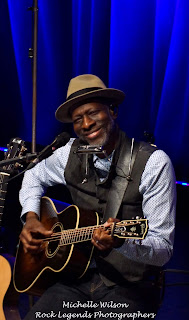 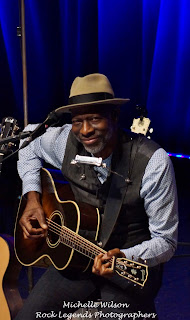 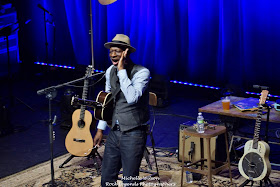 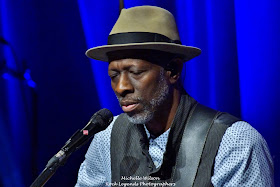 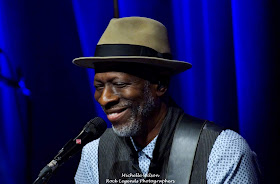 Keb' Mo' truly is one of the most enjoyable and talented artists on today's music scene. His Americana stew of blues peppered with elements of jazz, country, rock and folk has endeared his slice-of-life music to all types of people. His shows are not to be missed.

Check out the full gallery of photos from Rock Legends Photographers at the link: