The White Oak amphitheater was “pink” for a short time when the cover band “Brit Floyd” played on   Sunday, 14 Aug. 2019. Douglas White 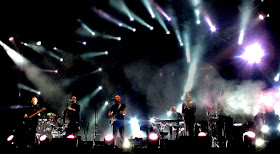 The members of Brit Floyd have recorded and toured with a variety of big-name performers, who've released their own LPs and headlined in their home countries around the world. *Members have performed with groups such as Yes, Genesis and Ultravox and played such venues as Wimbledon arena and the Royal Albert Hall (both in London.) They have studied at The Juilliard School in NYC, and include a member who won Canadian Idol. Most of them have been playing their respective instruments since childhood. 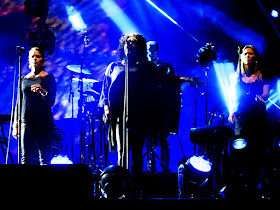 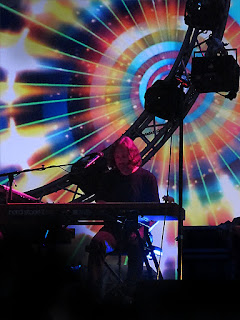 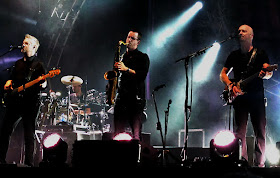 I had the pleasure of speaking with band founder and lead guitarist ‘Brit. Damian Darlington. *He grew up near Newcastle in the Northeast of Great Britain. Damian had played with various bands growing up to include a group consisting of several brothers and sisters. In 1994 he started playing with an Australian Pink Floyd cover band until 2011, performing in over 1300 appearances all over the world. 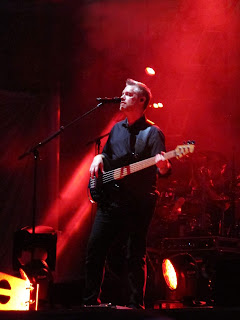 In 2011, he formed Brit Floyd with a handful of highly talented performers. The current list of musicians includes central New Yorker Ian Cattellon on bass guitar, Edo Scordo, the lead guitarist from Milan, Italy. Irish percussionist Karl Penney, native North Carolinian Ryan Saranich on saxophone, and St.Louis native Matt Riddle on piano & keyboards. The backup singers are Jenna Ket, 'Brit. Jacquie Williams, and Canadian Eva Villa. All three of these ladies have amazing voices and have had success recording and performing their own music and have backed up and written for top performers. Eva Avilla soloed “The great gig in the sky.”
Her voice is mesmerizing. Her performance of the song rivaled that of the original recording by British vocalist Claire Torri. The range and strength of her voice hit all of the notes with both force and finesse. After the show, I went home, woke up “Alexa,” and listened to the original on my Bose speakers. The sound was clean and crisp, and while the recording by Ms. Torri is spot-on Eva Avillas (who opened for Beyonce on a Canadian tour) was definitely better. Ryan Saranich performed a sax solo with equal zeal. 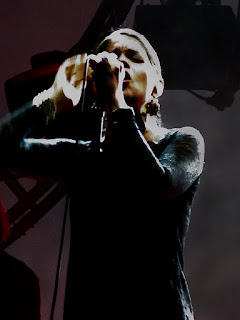 I arrived at the theater early ensuring that I had everything prepared and didn't have to rush. Sitting on the wall of the amphitheater relaxing for a minute before the show I watched the gates open, and an eclectic mix of fans started to pour in to see the band billed as "the greatest Pink Floyd tribute band."Long grey-haired hippies from the 60s and 10-year-olds with Brit Floyd T-shirts following behind mom and dad. There was a wide variety of T-shirts, bands such as Rush, Yes, The Stones, Brit Floyd, and Pink Floyd. These shirts represent bands that members of Brit Floyd have played with and in. Damian told me that he enjoys listening to jazz fusion and groups such as Rush, Pat Methany, and guitarist Al DiMeola. He further stated, laughingly, that he was even getting into listening to Bluegrass and some obscure band named Pink Floyd. 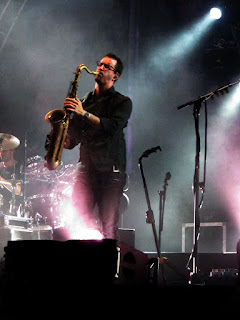 This performance was one of the last on their American tour, and Damian said he was looking forward to unwinding with family until the end of September. He's looking forward to seeing his family as they only rarely travel with them. They will then kick off their European tour at Teatro Metropolitan - Catania on the west coast of Sicily on 20 Sept. It will be the beginning of the European “40th Anniversary tour of the Wall.”  If you are a Pink Floyd "purest" lighten up a little. The next time they come to the States, open up your wallet and go see them. It's well worth the cost of admission. 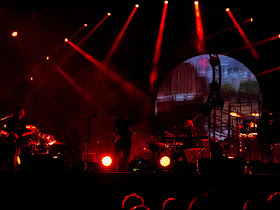